Knitted one sleeve. Looked a bit strange for some reason. Figured out that it is 3 inches not wide enough. I followed the pattern; I even did a swatch at the very beginning to make sure. I am not liking this pattern so much at the moment...it's been funky from the beginning. So I have to pull out the whole sleeve (or maybe I'll just be really naughty and start a new one without unraveling) and figure out how to make it the right size myself. I have put it aside for now...just don't have the patience tonight.
Posted by shooskua at 9:40 PM 1 comment:

I hope it's big enough!

Today, August 1st, is our seventh wedding anniversary, and the decade anniversary of our being a couple. Anthony and I got together as a couple on August 1, 2000; then were married three years later on the same day. It sure makes it easy to remember!
So it was our anniversary *and* Sunday so we decided to relax and stay in today so I spent the majority of today knitting on the sweater and so I've made great progress. 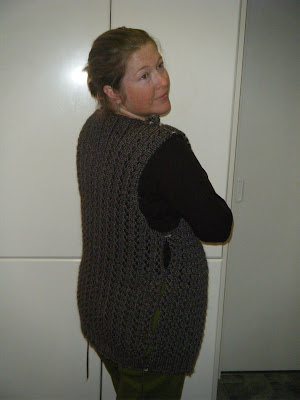 I have finished both fronts and the back and pinned it loosely together to get an idea of fit.

It is longer than I thought it would be (even after adding two inches) but I'm actually okay with the length. I think part of that is the yarn; it has a bit of give.  It just means it will be a nice laying cardi for cold days. I am a little concerned about the width of the front pieces, but I haven't added on the collar/front edging yet which looks to be at least 4 inches on both sides, so it will probably be just fine.

I *love* the color and the pattern and so I'm off to knit the cap sleeves now.

If I knitted the fronts a little wider and just added a simple border to the neck/front/armholes, it would be a nice vest cardigan just as it is. But I'll proceed with the pattern as written, except for having to compensate on the collar/front edging for the longer length.

It looks like I may have a few balls of this yarn left over. I could make a belt from the same yarn using linen stitch, which creates a nice, thick, dense sort of knitting. I'll have to see if it needs a belt after it's all done.

shooskua
I am an American originally from Orange County, California, splitting my time between California and New Zealand with my cherished love Antz, and have been a frequent visitor to Antarctica.